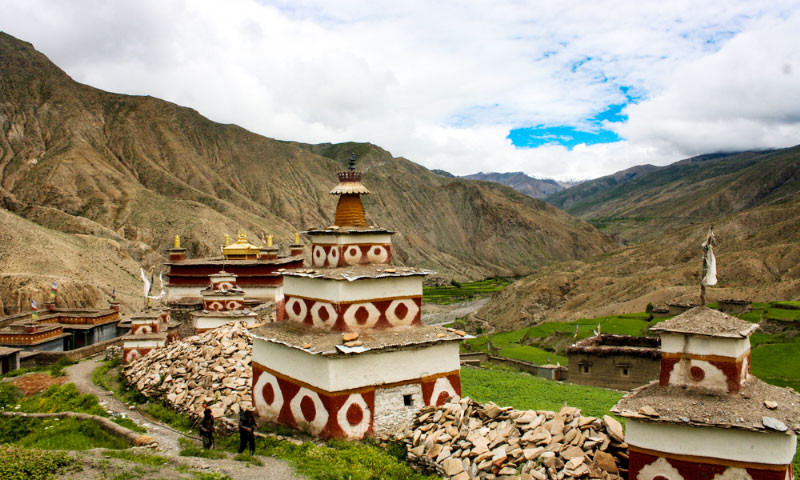 Dolpa, the largest district of Nepal, and a part of Karnali province, is an unsullied trekking destination for those interested in adventure sports. The district borders Tibet on the north and northeast, the districts of Jumla and Mugu on the west, Myagdi, Jajarkot and Rukum on the south, and Mustang on the east. The eastern and southern directions from the district also observe the Dhaulagiri and Churen Himal ranges while the west sees the mountains Sisne and Kanjiroba. Best visited during the months of April-May and October-November, Dolpa is surrounded by scenic havens on all sides, yet it isn’t as popular among travellers itself. But we’ll tell you why it should be your next travel target.

The Dolpo region was open to trekkers starting 1989 but despite of being an ideal location for the activity, people have rarely visited the place in the past two decades. With a terrain that highly resembles Tibet’s, Upper Dolpo has a very rugged landscape, desert-like plains and dry mountain ranges. And in this zone lie few of the highest settlements in the world with inhabitants who still follow Nomadic culture. You’ll be able to learn more about the shamanistic culture of the Bon religion along with Buddhism through the people who are some of the most warm and hardworking individuals in the nation.

With an environment so harsh and inhospitable, these people have been dependent on an agro-pastoral livestyle to survive. There are no roadways in this region; the people of Dolpa rely on air travel for precious cargo, and still use yaks and caravans to go to nearby places. But Dolpa’s pristine beauty and mysterious charm is not on par with other places in Nepal; much of the valley has been hidden away for the longest time, untouched and unexplored. Isolated by the difficult topography, the people in this region have preserved their lifestyle, along with 130 plus Gompas that have symbolized structural and religious integrity and fort-like build of their villages.

A significantly large area of the district falls under the Shey Phoksundo National Park- a conservation zone that has its name derived from one of the oldest monasteries in the country, Shey Gompa, and the deepest lake in the nation, Phoksundo Taal. The Phoksundo is one of nature’s most underrated wonders, with its crystal midnight blue and emerald colours, the lake is bound to mesmerise all of its viewers. Shey Phoksundo also protects endangered flora and fauna like the Rhododendron, Salix, white Himalayan birch, and silver fir that dominate the high meadows of the Trans-Himalayan region. The alluring snow leopard, blue sheep, musk deer, Himalayan tahr and the Tibetan wolf, all roam the region, and if one is lucky, they might be able to witness the breathtaking beauty of these creatures in reality.

The park also encompasses the Crystal Mountain, one of Nepal’s most sacred Buddhist pilgrimages- a peak that has to be circumambulated to generate merit. There are three Gompas in Shey village itself, such as the Komoche, Sel sumdo and Tsakhang Gompas. All these monasteries are a must visit if you are on a journey to connect with your spiritual self.

Trekking into Dolpa presents an exposure to the high and remote Himalayan valleys. The Lower Dolpo trek is one of the most exciting and challenging treks that allows trekkers to experience the real adventures of travelling on an off-the-beaten path, composed of steep and jagged hills. The 18-day journey is a walk through a semi-desert region combined with densely forested trails made up of huge meadows, browned and sandy landscapes, and terraced colorful fields that clearly show you the huge geographical  diversity in one small area. The trekkers also make their way through two high passes: Numa La and Baga La. And of course, your journey wouldn’t be complete without venturing into the national park and observing the rich history of people in the shrines near the lake.

Moreover, the Upper Dolpo trek is making your through pathways in the highlands, carved by the winds and the walkers. Scenic landscapes and explosions of colours at every twist and turn, what you basically perceive is nothing short of paradise. Churning rivers and rising snow-capped peaks, sunlight playing through the branches of coniferous trees and a steady incline towards the attainment of Nirvana. The 28-day trek shows you all that remote western Nepal has to offer. Ranging from the landscape to culture, you’ll see and know it all.

So, maybe, it’s time to pack your bags, get your permits and fly to Dolpa, and take the road less travelled. Because amongst the unseen and undiscovered, you’re bound to uncover a lifetime’s worth of vivid memories.