UNESCO Cultural Heritage Sites to visit when in Nepal 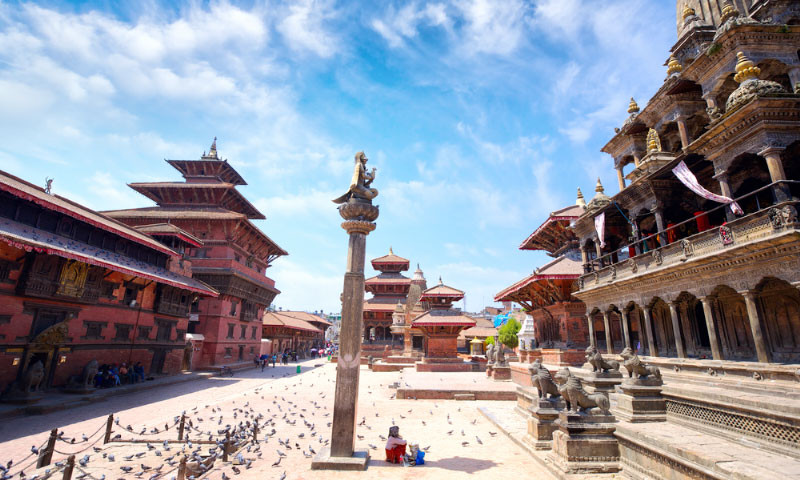 Into the Cultural Realm of Nepal

Nepal is a living museum, an artistic treasure overflowing with antique buildings and monuments. Navigate into hidden alleys of ancient Nepal and visit the majestic sites listed under the UNESCO Cultural Heritage Sites. From the birthplace of the ‘Enlightened One’— Lord Buddha to the temples of the mighty Gods and Goddesses in Nepal, get lost in the world of artwork of ancient tales and culture.

Despite the damage after the earthquake in 2015, the Durbar Square stands restored garnering attention to its ancient past. The street vendors hustle through the busy courtyard, orchestrating their display of colourful and crafty souvenir items beside the old durbar palace. Watch the locals chat over Chiya, tourists mingle by the patio built in the historic times of Malla kings.

Home to the living Goddess of Kathmandu, the mighty Kumari dwells in the Kumari Ghar in Basantapur. If you catch a glimpse of the divine living Goddess, count yourself lucky for the unusual occurrence.
Marvel at the spectacular architectural design that shields the statues of the powerful deities. Stop by to catch the impressive view of the Taleju Bhawani Mandir and admire the timeless aesthetics of its structure.

The Patan Durbar Square lies in the heart of Lalitpur, an artistic city known to be the home of the famous architect, Araniko. The durbar possesses striking Newari architecture with inscriptions of religious value in various temples. Packed with medieval architecture and beautiful hidden courtyards, embark on a cultural journey through Patan.
There are numerous temples and monuments at the durbar. The iconic Krishna Mandir built in Shikhara style crowned by 21 golden pinnacles while the interior is decorated with intricate details of the Ramayana. Explore the monumental Golden Buddha temple and wander into the countless courtyards of the ancient city. The Mahaboudha, Banglamukhi, Kunbeshwor are among others that are famous for sightseeing.
Discover local artistry; galleries, craft shops and eateries in the charming neighbourhood to grab your attention. Wander through the narrow alleys of Patan and look into temples adorned with artwork and fine embroidery of idols of deities.

Drench in the antiquity of the medieval kingdom of Bhaktapur, home to several Newari ethnicities, it is a place where ancient culture still thrives. Although the earthquake tore down temples to ruins, the city still proudly displays its architectural galore. From the Bastsala Temple, Nyatapola Temple, Golden Gate to the Lion’s gate, you can still keep yourself busy here.

Another major attraction to visit is the 55 Window Palace (Pachpanna Jhyale Durbar) built by King Bhupatindra Malla, the framework of the palace still holds architectural importance in Nepal.
As you wander around the cobblestoned streets, try out the local eateries and the famous Juju dhau (curd), a sweet treat that you will relish on a hot day. Remember to visit the National Gallery to absorb the tales and relics of the past.

The Nepali pagoda-style Shiva Mandir, is a major attraction for Hindu devotees. Thousands swarm to the holy shrine during Maha Shivaratri and Teej while plenty of tourists flock to see the abode of the mighty Lord Shiva.
Although the main temple is exclusive only to Hindus, the temple can still be viewed from a vantage point. The main shrine, which is guarded by four silver-plated doors and two gold-gilded roofs, is the iconic feature of the structure. The Pashupatinath sanctuary consists of many Shiva lingams, statues, pagodas, and shrines, to hold your gaze.

Few miles north from Bhakatapur, another historically significant temple, sits atop a hill surrounded by quaint villages and lush greens. Enter into one of the oldest and holiest traditional Nepali temples, adorned with sculptures and woodcarvings of Lord Vishnu.
You will spot a museum as you walk up the stairs to the Changu Narayan temple, unlike the other traditional museums. Immerse in the collection of old artefacts and coin collections, have a merry chat with the museum owner and listen to tales of Lord Vishnu.

Perched atop a hill rests the pristine whitewashed dome, believed to be one of the most ancient holy shrines in the Valley. As the meditative Buddha gazes calmly upon the utopian city, symbolising omniscience, let the stillness bathe you.

Legends have it that a miraculous lotus bloomed out of the lake – the now Kathmandu Valley – and the mighty Bodhisattva Manjushree cut a gorge in the hills to let the water drain out, opening ways for other pilgrims to witness the mystical lotus.

Buddhists and Hindus swarm to visit the sacred stupa to pay homage to the compassionate Buddha. Other playful visitors are the mischievous monkeys who splash into the pool on a hot summer day.
Let your eyes survey the sea of green trees covering the hill as you walk up the steep steps towards the stupa.

Keep in mind to watch dawn break from the peak of Swayambhunath and let the peaceful chants of the holy monk become a sublime experience for you.

As you enter the main gate of Boudhanath, the site of devotees around the holy shrine chanting prayers is sure to hold your attention. While distinctive monks clad in Buddhist robes stroll around the shrine, join in the Kora (circumambulation) of the holy dome.
The aroma of incense sticks and brightly lit butter lamps is a fusion that commonly entices your senses. Boudhanath was once an ancient trade route to Kathmandu and is still thriving with an array of local shops spread around the stupa. At a distance, monasteries, guesthouses, restaurants, and cafés encircle the spherical stupa. Spend an evening at the cafés perched on any nearby building and enjoy the panoramic view.

Like the spinning of the prayer wheels, be swept away in the wishful prayers of the loyal devotees joining in the union between the man and God.

Every day, throngs of admirers visit the holy birthplace of Gautama Buddha in Lumbini. The sacred Lumbini is marked with three remarkable sites, the Sacred Garden, the Monastic sites and the Educational and Cultural Zone. The notable Ashoka Sthamba is a significant relic, where King Ashoka ascertains the birthplace of the Buddha.

There are numerous beautiful monasteries built by Buddhists from across the world, keeping alive the spirit of serenity. If you want to be swayed by the spiritual aura of the vicinity, then sit by the gardens and meditate alongside the devoted monks.